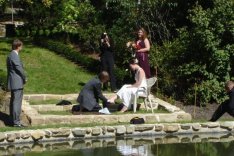 Today is our fifth wedding anniversary. Five years ago, Chad and I had the most beautiful wedding ceremony at a gorgeous park. The day was bright and warm, even at 10 a.m. Our wedding guests were seated around a large round pond and my dad walked me down a grassy walkway to stand with Chad. I was so happy. We washed each other’s feet during the ceremony, kneeling on the ground, promising to always serve each other faithfully. We had a missionary friend of Chad’s parents share a prayer and benediction in French, because our story starts in France and our love of that country is something we treasure. After the ceremony ended, we made our way around the pond to greet each one of our guests, our feet still bare from being washed. It was beautiful and I still think of it as the best wedding ceremony we could have created.

I’m writing this post coming off a fight we had earlier in the week. Sometimes our marriage feels so easy, because we get along so well and we love each other so much. But this week was hard. And I think part of me thought by year five, maybe we’d have it all figured out and I wouldn’t leave the house too angry to kiss him goodbye before work. That would be nice if we learned that quickly, wouldn’t it? You just work out the kinks in the first couple years and then settle in for a lifetime of happiness… but you can’t do that, because things are constantly changing and shifting.

It’s at once hard to believe it’s been five years and yet feels so long ago. Our marriage has changed and yet stayed exactly the same, too. I knew going in that it wasn’t a fairy tale, that it wouldn’t always be easy, but I didn’t know the specifics of that. I didn’t know how many times we’d fight about the same thing, how hard it would be to say things out loud to Chad sometimes, how helpless I would feel when he got sick, or how complicated it would be to grow when he knows so well the person I already am. I think that’s been the surprise I didn’t expect in our marriage: the difficulties of making peace with who I am and reconciling that with the person Chad married, and vice versa– watching him make peace with himself and reconciling that with the person I married.

When you think about it, I’m sure you can come up with an example of this, of changing beyond someone’s impression of you… For instance, I have an aunt who learned that I liked carousel horse music boxes when I was young. She would buy me one for Christmas every year, even after I had grown out of it, because for her it was hard to separate me from that piece of my identity. We grow and evolve, and sometimes it’s hard for others to keep up. Sometimes it’s hard for us to keep up.

And when you get married, you’re one person, but that changes as time passes. And sometimes you change in ways that even surprise yourself. You learn things about yourself that you thought would never be part of who you are. Or you just evolve in a way that is unexpected, unforeseen, taking in experiences that you never thought you’d have. Recognizing those parts of yourself and making peace with them can be easy or hard or anywhere in between depending on how you’re seeing yourself that day. And it’s constant. We’re constantly evolving and changing and becoming a different version of ourselves. It’s happening to you, and it’s happening to your spouse. And then you’re suddenly married to a feminist, even though that’s not who you married five years ago. Or you’re suddenly married to a wine educator who can tell you more facts about cabernet sauvignon than you thought even existed.

I think being married is an exercise in faith. There are so many unknowns, you just have to take a leap and trust that five years later, ten years later, twenty years later, the essence of the person you married will still be there even though a lot of their details have changed. Chad is still the intelligent, witty, faithful, and somewhat nerdy man I married, the same man I fell in love with four years before that. But now he talks a lot more about wine, works from home, stresses about things in our house falling apart, and thinks about a future with kids in it.  In five more years things could be very different than now, or maybe not. I just trust that no matter what changes we go through, we’ll both do our best to love each other through them. Some changes will be great for our marriage, and others may challenge it.

In our vows five years ago, Chad and I put the words, “I will choose to love you every day.” It was intentional, knowing that every day is another chance to love better, another promise to keep trying, even though things might look different than we expected.

I’ve mentioned this blog post before, but it’s my favorite about marriage, so I’ll mention it again… Candace at The Thoughts I Think wrote a great piece about marriage on her fifth anniversary (our anniversaries happen to be on the same day, so Happy Anniversary, Candace and Gil!)  I love this post because it’s so true and says things you don’t often hear people say about marriage. She writes, “We think differently about life and God and politics than we did five years ago. We have different passions. We have wanted kids and not wanted kids. What we thought we were going to do with our lives has changed. Nobody tells you that the person you marry will not be the same person in 2 or 5 or 12 years. Nobody tells you that you have to learn to love the person that your spouse is at each juncture in their journey. Nobody tells you that you have to learn to love yourself through the changes in order to be able to love that person fully.”

Every year on our anniversary, Chad and I go back to Bamboo Brook, the garden where we got married. We spend some time there together, walking the grounds, reading together, and celebrating another year together. We look back on the past year and forward to the next. We bring the foot-washing bucket my friends Jen and Ashley bought for me THE DAY OF OUR WEDDING because I had forgotten to get one before then, and we recite our vows and wash each other’s feet again. It always feels more sacred than I expect, even after doing it five, now six times. Because we’re promising again to accept each other and keep learning about each other, to try harder, to love better, to forgive quicker. And it makes the next year seem possible, no matter what the last one was like.

To Chad, you are my favorite person, and being married to you is sometimes hard, but mostly amazing, and always worth it. Thanks for walking with me as we figure life out. Thanks for laughing with me and holding me and teaching me. I love you.

3 thoughts on “Marriage: An Exercise in Faith”